A Celebration of Repression

Today’s the day for women in Afghanistan to don their bright blue burqas, obtain the services of male companions, and head off to Herat to take part in International Women’s Day.

Thousands showed up for the gala event where they were treated to readings from the Koran and assurance from imams that they will remain subservient to males under the Karzai government, although they might (if they are beyond their child-bearing years) obtain permission to work in the poppy fields.

Hillary Clinton, who championed the event, failed to make an appearance in her latest hijab, and Michelle Obama, who expressed her concern for the plight of Afghan women, was nowhere in sight (unless, of course, she was concealed by her black burqa).

The speakers at the event – – Islamic scholars and male government officials – – made no mention of the slave markets in Nangarhar where women are sold to the highest bidder and of the refusal of the current regime to protect women from rape and murder. 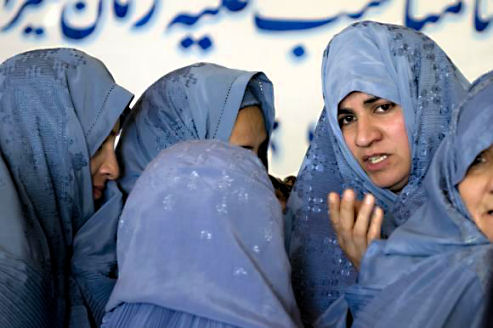 The reaction of the women, for the most part, was difficult to discern since the majority wore full facial coverings.

No questions arose from the audience over the public floggings and stonings of women for suspected acts of adultery, let alone demands for suffrage and equal rights.

Still and media, the media treated the event as a ground-breaking celebration, despite the fact that the women have little to celebrate.

According to the U.N.’s Human Rights Watch, 87.2% of the Afghan women are subjected to physical, sexual, and psychological violence.

55% of all brides have not reached their 16th birthday. Many are married to men who are over 60.

70% of all marriages are forced, with no possibility of annulment or divorce.

89% of the Afghan women are illiterate and unschooled – – most deprived of even an elementary school education.

The women are not permitted to appear in public without a male companion and without head to toe coverings.

They are permitted neither to drive nor to seek employment.

The UN further reports that the plight of women may have worsened since the US invasion and occupation.

The women who sat patiently during the long-winded male orations and Islamic exhortations appeared to appreciate a day from the drug and dung heap of their villages, even though the event failed to include a fashion show of the latest Islamic styles, including the increasingly popular burqaini bathing suit.

5 Responses to WOMEN’S DAY IN AFGHANISTAN