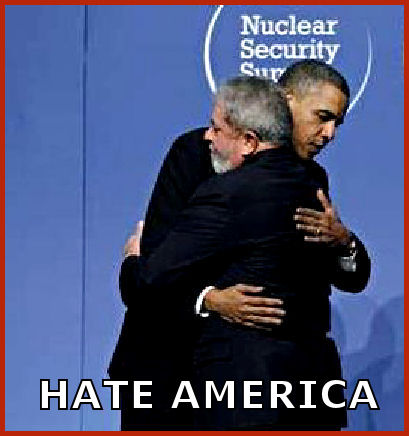 U.S. PRESIDENT OBLIVIOUS TO NUCLEAR THREAT FROM BRAZIL AND NEW “AXIS OF EVIL”

The embrace came despite the fact that Lula opposes unilateral nuclear disarmament and says that it is “unacceptable” for some countries to be “armed to the teeth,” while others remain without a nuclear arsenal.

At the conference, Lula further expressed his opposition to the imposition of sanctions against Iran, arguing that the Persian nation has the right to develop atomic weapons because it feels “threatened by Pakistan and Israel.”

Before engaging in the bear hug, Mr. Obama said of Lula: “That’s my man right here. Love this guy. He’s the most popular politician on earth.” 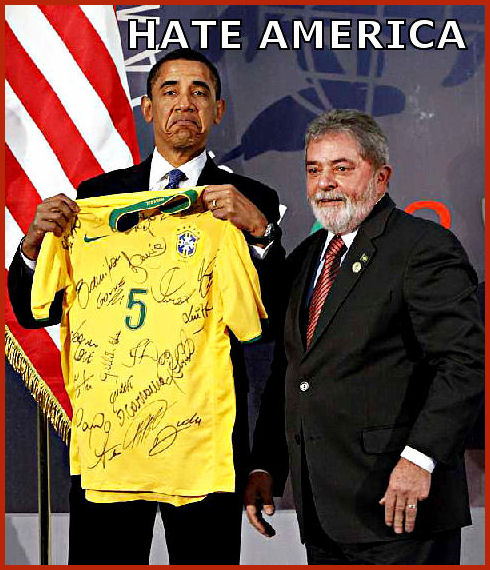 “I Love This Guy,” Barack Gushes

Mr. Obama made no mention of the fact that Brazil, like Iran and North Korea, purchased its centrifuge technology from Dr. Abdul Qadeer Khan, the Dr. Strangelove of the nuclear age, and remains in the process of highly enriching uranium to produce a stockpile of nuclear weapons.

Mr. Obama further neglected to make mention of the fact that Brazil refuses to grant International Atomic Energy (IAEA) inspectors the right to conduct a full investigation of the Resende nuclear facility. The inspectors were merely permitted to view parts of the centrifuges while the Resende officials kept other parts under cover.

The secrecy surrounding the Resende facility has caused Constantine Menges, a senior fellow of the Hudson Institute, a think tank in Washington, DC, and a former national security advisor to President Ronald Reagan, to express fears that a nuclear-armed axis of evil between Brazil, Venezuela, and Cuba was taking place within the Americas.

“Lula’s a supporter of terrorism,” Mr. Menges said. “He will, I believe, permit covert support to be given to bring about anti-American regimes in Bolivia, Columbia, Ecuador, and Peru.”

A lifelong Marxist and ally of Fidel Castro of Cuba and Hugo Chavez of Venezuela, Lula is the cofounder of the Forum of Sao Paulo, a group that supports anti-American activities throughout the world.

He is also Latin America’s sharpest critic of the U.S.-led invasions of Afghanistan and Iraq.

While campaigning for Brazil’s highest office, he criticized his country’s compliance with the Nuclear Nonproliferation Treaty by saying: “It is not fair that developed countries, which have nuclear weapon technology, demand that others not have them or deactivate what they have. All of us developing countries are left holding a slingshot while they have atomic bombs.”